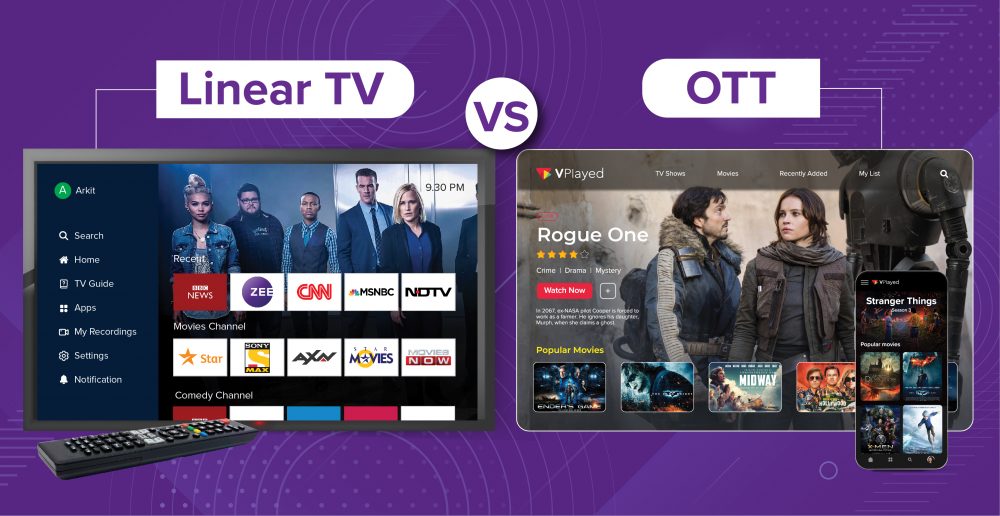 While you may be familiar with the terms “linear TV” and “streaming,” you may not know what sets them apart from each other or how they relate to you as a business owner.

These distinctions, however, are important to delineate so that you know how to best market your products or services. So what’s the difference, and what’s the right option for you and your business?

What Is Linear TV?

Linear TV is what most people think of when they hear the word “television” — it’s the traditional model of delivering and viewing television content. This form of entertainment is usually served to cable or satellite TV subscribers, offering a selection of shows from various networks on a set schedule.

With linear television, people have to tune in at precise times to watch their preferred entertainment or rely on devices like DVRs.

What Is Streaming TV?

Streaming TV is television content that is delivered over an internet connection, as opposed to cable or satellite. Thanks to the internet revolution, people who subscribe to streaming services no longer have to adopt the schedule of networks and cable providers; instead, they can select the content they wish to view on demand.

Streaming TV is also device-independent, meaning it can be viewed on a connected TV (CTV) device, laptop, tablet, or other devices with an internet connection.

One of the strongest appeals of linear TV is the fact that it’s familiar. After all, it’s been around for nearly a century. Because of its established nature, it’s easy to find plenty of research and data that sheds light on the demographics that regularly consume linear TV. Thanks to companies like Nielsen, advertisers can rely on comprehensive research on viewers in regard to their interests, viewing habits, favorite television networks, etc.

There’s also the downside of DVRs. Thanks to the invention of the digital video recorder, even people who religiously consume traditional television will record their favorite shows (even the news), only to fast-forward through advertisements.

Finally, there’s also the possibility that if people watch live TV, they may just change the channel when the commercials come on. Or, if nothing else, turn to their phones for a three-minute distraction.

One of the top benefits of streaming TV is its popularity. TV viewership trends show that viewers are “cutting the cord” and embracing streaming television by the droves. There are many reasons for this shift, but one of the most important is that viewers can now be in full control. They no longer have to wait for a specific time slot to watch their preferred content.

Streaming TV also represents a very clear and popular demographic for advertisers: the 18–49 age range. A study published by Google showed that in one month, more people in this demographic consumed entertainment on YouTube than they did from all linear networks combined.

Advertisers also benefit from the high trackability of clickable advertisements. As for those that aren’t clickable, it’s still possible to track how long these ads are viewed and how many are skipped (if possible). It’s even possible to connect website visits with a previously viewed streaming ad.

But it’s not all good news for business owners. After all, there are some demographics that are either less tech-savvy, and more still that prefer traditional television. These age ranges will be much easier to reach on linear TV, at least for the foreseeable future.

It’s also trickier to design the perfect advertisement for streaming services. Attention spans are plummeting, and now that ad-blocking extensions are growing in popularity, it’s crucial to keep ads short, relevant, and engaging, without being intrusive or repetitive.

As always, the most effective ad campaigns will be based on a thorough understanding of your audience, specifically where they consume content and what devices they use. If your target customers are younger consumers who are moving toward streaming, this is the perfect time to make a change if you haven’t already. This doesn’t mean abandoning linear advertising entirely, but consider dedicating more ad spend to streaming ads than traditional television.

Ultimately, both linear and streaming ads can be effective in attracting the right audiences and increasing revenue. However, the rapid growth and mass appeal of streaming likely means that most brands will benefit from making this the primary focus of their video ad campaigns.

A Career to Love