Is this Tom Brady’s Swansong year? 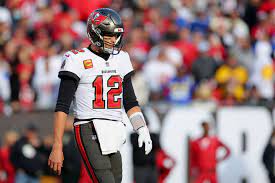 When it comes to the discussion of who is the greatest NFL player of all-time, Tom Brady is usually the name most associated with the ‘GOAT’ debate after enjoying one of the most successful sporting careers out of any professional athlete, a career that could soon meet its end after this upcoming NFL season.

Since being Drafted to the NFL back in the sixth round of the fabled 2000 Draft Class, Brady has since carved out a one of a kind footballing career which has culminated in the legendary Quarterback winning a grand total of seven Vince Lombardi trophy’s as well as being named as Superbowl MVP on five separate occasions.

To go along with his individual and team accolades, Brady also holds numerous NFL records that include the most QB wins, passing attempts, passing completions, passing touchdowns and yards as well as tying the league’s longest touchdown pass of 99 yards during a September 2011 game against the Miami Dolphins whilst playing for his long-time tenure club the New England Patriots.

In short, Tom Brady is widely regarded as the greatest NFL player of all-time and after spending 19 years with the team that originally drafted him, the New England Patriots, Brady chose to swap the frigid winter temperatures present in Boston for the scorching heat of Florida to join the Tampa Bay Buccaneers in 2020.

At age 44, Brady helped deliver the Bucs their first Superbowl victory since 2002 and claimed his record seventh championship ring with a comfortable win over the reigning champions Kansas City Chiefs at Superbowl LV.

With another championship ring now firmly wrapped around his finger, Brady’s on-field legacy is well and truly assured but it seems that it is not necessarily completed as of yet.

Despite the calls and rumors made surrounding a potential retirement, it seems that the ‘GOAT’ wants to give one last throw of the dice before riding out into the sunset and putting his NFL playing career to rest.

The Bucs made a return to the 2021/22 Playoffs with a Wild Card victory over the Philadelphia Eagles before losing in the Divisional Round to the eventual Superbowl champions the LA Rams soon after.

With Brady’s long-time tight end partner and close friend Rob Gronkowski now announcing his full retirement soon after, it seemed almost inevitable that Brady was ready to call it quits, which at one point he did.

However, Brady chose to remain as a Buccaneer for the 2022/23 season and will once again suit up ahead of another highly anticipated NFL season that begins with a trip to ‘Jerry’s World’ take on the Dallas Cowboys with the Bucs looking as the favorite in the money line NFL week 1 odds on DraftKings at -130.

The Bucs also remain as lively Superbowl contenders but will face stiff competition from a number of storied franchises that are eager to claim world championship status including a few former Brady opponents that will be sighting revenge.

One of the main worries for Brady and the Bucs for the 2022/23 season will be sighted around Brady’s health and longevity for the season given that he is now 45 year’s old and the worry that the physical toll that the NFL regular season could place on his ageing body.

Without Brady, the Bucs are not capable of mounting a challenge for the Superbowl this year and will need to be assured that he is able to stay health and keep playing at the elite level that he is forever renowned and immortalized for.

All eyes will be set on Tampa Bay and whether Brady is able to gain one last piece of jewelry before hanging up his helmet one last time.

The competition surrounding the Bucs chances of earning a passage back to the Superbowl this year is becoming an increasingly daunting task given the sudden emergence of some major contenders throughout the off-season including the familiar foes of the NFC such as the Green Bay Packers, San Francisco 49ers and LA Rams that are all amongst the conference’s most elite teams.

In the AFC teams such as the Las Vegas Raiders and Denver Broncos made huge acquisitions in the post-season, whilst the LA Chargers, Cincinnati Bengals, Kansas City Chiefs and Buffalo Bills all remain as viable opponents for the NFC in the Superbowl later this season.

If the ‘GOAT’ wishes to sign off on his own version of Michael Jordan’s coveted ‘Last Dance’ then it will be an increasingly challenging journey back to the top before finally announcing his almost impending retirement and entering the Hall of Fame as a first ballot name as well as being the greatest to ever do it.

Why do you need a Smart Vacuum and Mop?