How To Be An Efficient And Effective CSGO Player (Tips & Tricks) 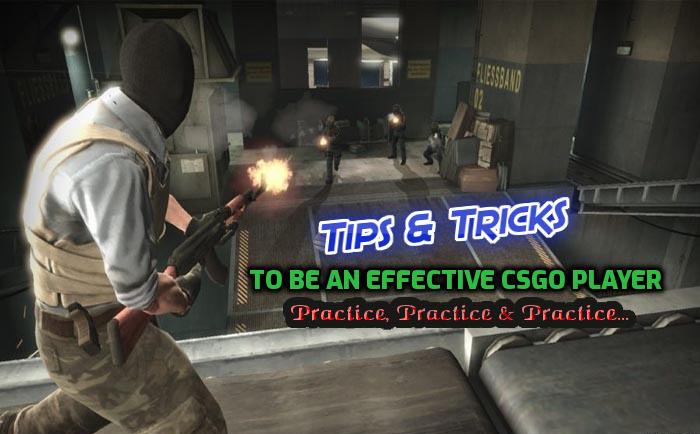 Counter-Strike Global Offensive (CSGO), this game is a top one in the list of most played first-person shooter games. If you are a new player and want to develop your skills in this game then this article will be helpful for you. In this article, I will talk about the various tips and tricks that can help you become an efficient and effective player in the Counter-strike Global Offensive Game.

The game Counter-Strike: Global Offensive or CSGO for short, is not a game that allows you to “run and gun” your way to victory. In fact, the entire premise of the game is based on precision and accuracy. As such, it’s probably one of the most difficult first-person shooters to master.

So, first of all, you must need to improve your aim because without aiming well you’re not going to be able to survive in this game. You can’t just run around and expect to kill everyone before they get a chance to shoot at you. If you’re not aiming well you’re going to have a hard time shooting at people and killing them. Aiming well will give you the edge over other players who aren’t as skilled as you are. It will help you kill more people and increase your overall rank in the game.

Listen To The Footsteps

So it is necessary to listen to the footsteps while playing the CSGO game.

A crosshair is an on-screen object that you aim with. It is a small dot that stays centered on the screen and represents where your bullets will be fired at. There are different types of crosshairs, and you should find the one that works best for you.

When you first start playing CS:GO, it’s easy to miss all the time while shooting enemies. Your crosshair placement is not good enough, so you have to keep trying until it gets better.

Use Flashbangs As Often As Possible

Flashbangs are an important part of Counter-Strike. They give teams an advantage over the other team who is unprepared. You should use flashbangs as often as you can, they will help you and your team out so much in the long run. I cannot tell you how many times I’ve used a flashbang and caught my opponent off guard. A lot of people underestimate how strong flashbangs are in CSGO, but they’re essential for winning rounds.

Aim For The Head

You should aim for the head because it only takes one bullet to end an opponent’s life. Hitting an opponent in the leg, stomach and chest is not a guarantee that you will kill them.

They can get healed by their teammates and revive themselves without needing to use a medkit. You don’t want to waste bullets on your opponents when you could’ve killed them with a well-placed headshot.

It is important to be conservative in using your bullets. You want to make every single shot count. This is why aiming for the head is so important. The most efficient way to finish off your opponents is with a well-placed headshot.

Land Your Grenades In Place

Work on your grenades and try to land them in places that would greatly benefit you and your teammates. You should make sure you can reliably throw flashbangs with speed and precision, as well as learn how to effectively use smokes.

You should work on using smokes and flashbangs to set up pushes or win rounds for your team. You’ll often see good players use flashes and smoke to gain an advantage by forcing the enemy team out of position or making it harder for them to see.

You should also learn how to efficiently throw grenades from different angles. It will help you a lot in close combat situations or when you’re trying to trade kills with the enemy team.

You should also practice throwing grenades at certain places (such as corners) so that they explode right next to the enemy player’s head, which is usually enough to kill them instantly. This can be used in various ways, such as a way of baiting enemies into an area where they will be killed easily by your teammates (using flashbangs) or simply used as a way of getting an easy kill while taking minimal damage yourself (using smoke grenades).

These are some essential skills you need to get improved to get higher rankings. Thus you can’t have rankings on non-prime accounts you have to buy a CSGO prime account to get rankings.

There is no shortcut to getting better at playing CSGO. The only way you can improve is by playing and learning from your mistakes. You can also learn from watching your teammates play and listening to the advice of more experienced players.

If you want to get better, then you need to practice, practice and practice some more! While it’s true that some people have more natural talent than others when it comes to FPS games like CSGO. Anyone can become a better player if they put in the time and effort required for improvement.

In short, these are just a few tips and tricks that you can use that will help you be a better CSGO player and have some higher rankings. Everyone in this game wants a higher ranking in seconds. But that’s not possible. As we have said before, practice is the only way to become the best.

Thus most of the players in CSGO become stuck between the Gold Nova 3 and the Master guardian 1 ranks. It is very tough to reach the highest ranks. Having higher ranks benefits nothing but you will get some extra respect in the field of Fight. Unfortunately only the premium account holders can have a ranking. The only way to receive XP and Rankings you need to buy CSGO Accounts. Everyone’s playstyle is different. They might not be relevant to your style, but they will hopefully give you something to try out.

How to Prepare For Six Sigma Green Belt Certification

Are My Rapid Mood Swings a Sign of Bipolar Disorder?