How many ICC T20 Cricket world cups did your country win? | Standings & Predictions 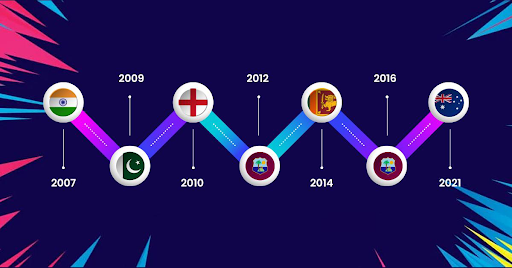 With a total of seven T20 World Cups happened so far, we have six different title winners. There is one team which won twice!

Find out which team has won the maximum number of T20 world cups and the predictions for the upcoming T20 world. It will definitely help those who look for on cricket online betting, through platforms like Yolo247.

With the present conditions and packed competitions, guessing the winner of 2022 T20 world cup is going to be the most difficult task, as the winner can be anyone.

Excluding Bangladesh and Afghanistan, who also have put up a decent fight even when they lose, there are at least 5 strong contenders for the title. Here is our list of Top 5 Cricketing Teams who have a better chance of winning this year’s T20 world cup.

During the 2021 T20 world cup, the men in green put up a great show, with Babar Azam in his prime form. During the Asia Cup, the spectators couldn’t witness much of his batting prowess. However, the entire team is pumped up with the consistency of Rizwan and Iftikhar and with the precision of Naseem Shah and Shaheen Shah. They can get back the trophy, after 13 years.

However, except Rizwan, there is no one to bank on from the batting unit. With little to no experience in the international arena, the performance of the younger players is also questionable.

After winning the Asia Cup 2022, defeating Pakistan in the Finals, now the Srilankan team is eyeing on the T20 World Cup 2022. The team is so vibrant with youngsters throbbing in all the departments. Their attitude toward a game, particularly in the death overs is commendable. With the captain in the middle and attacking batsmen in the top, the sloggers have no worries about going after the bowlers. Rajapaksa will be the key man, if they get a chance to win the trophy.

As always, as a team, Sri Lanka is not consistent, which may be a worrying factor.

The defending champions are having a good time on their tour of India, winning the first T20, chasing the huge target of 208. Green has been successful being an opener alongside Finch. Smith cements the innings, while Maxwell accelerates the score rate. Tim David, Wade and Cummins can be destructive at the death overs. Anyone of them is enough to change the momentum at the end of their innings.

It’s almost a perfect combination. Their openers are blasting, hitters are thrashing, but their middle-order is still an issue. With two quick wickets in the powerplay, the Australian team will be in trouble. The biggest advantage is that the tournament happens at their home grounds.

On paper, the most dangerous team is England. Their bowlers can hit the deck hard and the Australian pitches assist them in all possible ways. They can bat deep with a hitter at every position. Butler, Moeen Ali, Bairstow, Roy, Sam Curran, Alex Hales, Jordan, Livingstone, Ben Stokes, David Willey and Chris Woakes: they are going to cross 200, 3 out of 5 times if they bat first.

If there are no surprises, they are going to the Semi-finals without second thoughts.

With their new T20 captain, Rohit Sharma who has won 31 out of 40 matches he has captained, this side looks promising. Also, he has a great winning percentage as a captain leading Mumbai Indians. In addition to that, India’s bench strength is mightier than any other teams. Rohit, Rahul, Kohli, SKY, Hardik, DK/Pant, Axar/Ashwin/Chahal, Bumrah, Bhuvanesh and Deepak Chahar/Arshdeep/Harshal Patel/Shami would be the combination for the playing 11. Apart from that, Shreyas Iyer, Hooda and Bishnoi are there as back-up.

Let’s keep an eye on this team. They have all the potential to win the trophy on paper and on field. Or they would fight till the last ball. Whatever the result is, the match will be nail-biting.

All the cricket betting individuals on Yolo 247 have varied opinions. Stay ahead of the herd and read more about the predictions, before initiating your t20 world cup cricket betting.