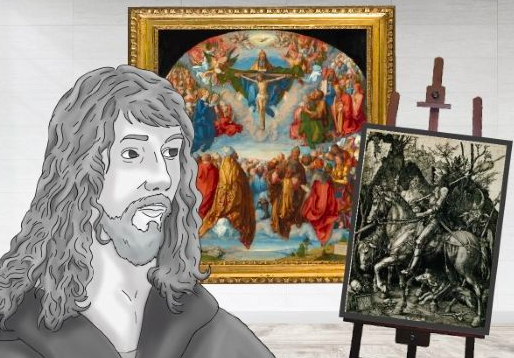 Born in 1471, Albrecht Durer was a prolific artist who managed to gain recognition early in his twenties. He is known as the great artist of the High Renaissance. He has produced 1312 artworks, including woodcut engravings, self-portraits, landscape paintings, and draughtsman drawings and sketchings.

Albrecht Durer has been an artist ever since he was young. He’s the second oldest of 18 children. When Durer was old enough, he became an apprentice for his father. Further down the road, young Durer began to work in Michael Wolgemut’s studio. There he made his first-ever artwork (his father’s portrait) at the age of 13. He also made some self-portraits which at that time (Renaissance) was considered very unusual.

With the help of Wolgemut, Durer became familiar with woodcut engravings and drypoint techniques. Durer traveled all his life, even after getting married. Today we know more about Durer’s life than any other Renaissance artist, and this is because of the journals and notes he left behind.

Those notes contain all about Albrecht Durer artist. We’ve picked out some spellbinding facts for you.

In 1495 during spring, Durer was returning to his hometown. On the way back, he stopped at the Alps and made a series of 32 landscape paintings using watercolors. Botanists used this series of Albrecht Durer drawings as a source of information and inspiration; the landscape is of the city, Trento.

During his visit to Italy, Durer developed a new artistic interest in portraying human bodies. As the Catholic Church was on the rise during his era, nudes were only drawn from a religious perspective.

His most famous work in this genre that he created is ‘The Women’s Bath’ in Nuremberg. This was done in his youth. The painting portrayed a bathing house where six women and two children were drawn nude. The Renaissance painter wanted to make ‘The Men’s Bath’ but never got to it.

Durer Was Also An Author

The famous Renaissance painter spent his earlier years painting, but during his final years, he started to explore life as an author.

Measuring with a Compass and Ruler contained all his theories related to geometry. Albrecht released several versions of this, each focusing on a different subcategory. For example, in the Complete Woodcuts of Albrecht Dürer, the painter mentions his 300 great woodcut artworks. Another notable book of his is Of the Just Shaping of Letters, where the artist explains the precise construct of Roman Capitals geometrically.

He Was Honoured Even After His Death

Albrecht Durer died in 1528. He traveled to the Netherlands hoping to see a stranded whale, and the artist caught malaria. He spent seven years going to the doctors for consultation. After his death, one of his friends wrote the elegy on his tombstone, ‘What was mortal of Albrecht Dürer lies beneath this mound.’

It is also said that some other friends, after Albrecht’s death, took out his body for a few days to make casts on his face and hands. Another devotee, Hans Baldung, sent someone to cut a lock of Durer during the ceremony. The strand was sent to Strasbourg. Today it is kept in the Vienna Academy of Art in a silver-bound reliquary.

Albrecht Durer Was Not a Loving Husband

The artist married in 1494. His wife’s name was Agnes Frey. Their marriage was devoid of love, and it was an arranged marriage set by his father to increase his social status. The artist was given two hundred florins to marry the beautiful Agnes Frey.

Frey was a loving and faithful wife, but she wasn’t supportive of Deurer’s career. The painter Albrecht Durer rarely mentioned her in his journals; when he did, it was in a rough tone. In his letters to Pirckheimer, he used words like ‘old crow’ and various other remarks.

They’ve spent more time apart than close. During the plague, Durer left for Italy alone, living there for nine years. Their relationship was that of a husband-wife less and business partners more. Agnes was responsible for marketing Albrecht’s painting. They used to visit the market to sell his prints and paintings.

When Albrecht went on a long journey to Italy, during that time, his wife handled the workshop. Even after his death, Frey continued selling all her husband’s work. They had a childless marriage, and the famous artist’s name died forever with him.

Adoration of the Trinity –  Albrecht Durer

Religion Played a Major Role In His Work

Studying his artistic and theoretical work, it was seen that Albrecht was a religious person. For example, when making self-portraits, the artist painted himself as Jesus, believing every Christian can be portrayed as Christ.

Although he had faith, his precise religious leanings are not known. He never broke ties with Christianity, but he was always involved in controversies regarding religion.

He admired Martin Luther, a Christian who fractionalized the Catholic Church and started the Protestant Reformation. In his journals, Albrecht wrote his desire to paint Martin Luther. According to Durer, Luther had helped him overcome many difficulties. The Lutheran Church, on 6th April, organizes an annual event to honor Durer.

Out of all the Renaissance artists, Albrecht Durer holds excellent recognition. His journal entries and notes helped historians see his journeys through his eyes and helped them gain knowledge about that era. Albrecht’s artwork is spread worldwide, located in different regions. The ALBERTINA Museum contains 140 works of the artist, making it the no.1 of the most significant collections.

Why Become a Nurse?