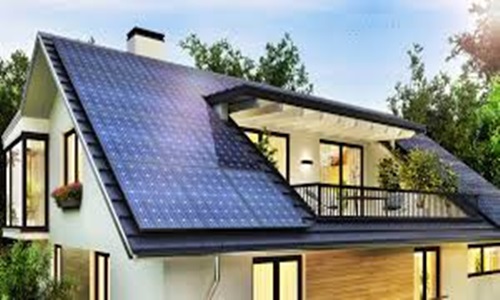 Sunlight is a clean, infinite source of energy. And an on grid solar system is a model that makes harvesting electricity from sunlight to power homes and housing societies a reality.

An on grid solar system is in fact a careful arrangement of:

Having a home or a housing society run on solar power has countless benefits too. And those are the benefits we’ve unfurled in this guide.

Care to indulge in the benefits of installing an on grid solar system in your locality? If yes, this guide is a goldmine of answers. Dive in!

How does an on-grid solar system work?

Yes, we know you want to know the reasons why your locality needs an on-grid system. But first things first – let’s quickly explain how this system works.

Top 5 Reasons to Befriend an On Grid Solar System

#1. It Reduces your Electricity Bill

Although you cannot replace electricity from your life, you can, at least, replace the source with which electricity is generated.

Here’s what we mean!

Once an on grid system is installed and becomes fully functional, the electricity that it will produce will be free.

Let’swalk you through some numbers now.

If your average monthly power consumption is 600 units and the tariff/unit in your state is ₹8, your monthly electricity bill would be approximately ₹4,800.

This same amount of power (600 units) can be generated by a 5 KW solar system. So, if you install a 5 KW on grid solar system instead of relying solely on fossil-fuel-based electricity, your monthly electricity bill will reduce by up to 90%.

#2. It Reduces your Dependence on the Grid

A solar system is a very practical model. When you install the right capacity plant, it will generate sufficient electricity to cover all your energy requirements.

Another benefit of having an on-grid system is that your solar system keeps interacting with the grid.

The units produced during the daytime are used to keep the appliances running throughout the day. And the extra units are exported to the grid.

At night time, electricity is imported from the grid to keep the appliances running.

The bidirectional meter keeps a tab of this unit exchange and the data is used to generate the solar bill.

If your system supplied more units to the grid, you will get credits from the discom in your next month’s bill.

If your system imported more units, you will pay the discom for those extra units you used outside of what your solar system produced.

#3. It Reduces your Carbon Footprint

It means that if you install an on grid 5 KW solar system, it’s as good as planting 75 trees.

Needless to say, your carbon footprint will greatly reduce.

#4. It Increases the Sales Value of Your Property

Electricity bills are one of those monthly expenses that take away a big chunk of a family’s income. When you have a solar system gracing your rooftop, it means that your house generates electricity on its own.

Needless to say, properties that have a solar system installed sell at a higher price because the future owners won’t have to pay for electricity.

#5. The Return on Investment is higher

There’s a reason that a solar system is called a one-time investment – tier-1 modules have a life of at least 25 years.

Yes, there’s definitely some amount of upfront investment that’s required. But the kind of benefits and savings that you’ll get from solar are worth it.

This means that a 5 KW solar system will require an investment between ₹2,25,000 to ₹3,50,000. When a subsidy is offered, this cost is further reduced.

If your electricity bill was ₹4,800/month before installing a solar system, it will be nil after going solar. Your yearly savings would be more than ₹57,000.

Keeping in mind that you will most likely get a subsidy, the initial investment will be recovered within 3-5 years. The system will continue to generate free electricity from sunlight for decades to come after the break even period.

No FD or RD will give you the sort of returns that a solar system will.

Installing an on grid solar system is the way to a better future. Not only will it save you a lot of money but it’s the only way forward to protect the environment.

If we have to stop – even reverse – the damage that global warming has already done, it’s about time to switch towards the use of renewable energy sources. And there’s no better way to do it other than installing an on grid solar system.

The Complete Guide to UPS Fingerprinting Services And...

How To Stay Energized as an Artist

What Are the Benefits of Drinking Water Daily?

Pointers for Propelling Yourself Forward With Personal Development

PMP (Project Management Professional): What Is It?

How to Choose the Right Retail Business Consulting...